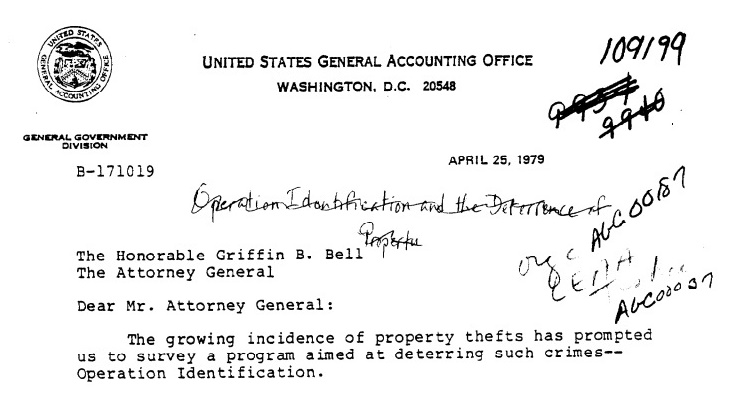 This is a memo from 1979 sent to the United States Attorney General, Griffin B. Bell from the Director of the United States General Accounting Office, Allen R. Voss, titled, “Department of Justice should explore the feasibility of a uniform identification system for marking personal property.”
https://www.gao.gov/assets/130/126467.pdf

Department of Justice should explore the feasibility of a uniform identification system for marking personal property.

The Honorable Griffin B. Bell
The Attorney General

The growing incidence of property thefts has prompted us to survey a program aimed at deterring such crimes—Operation Identification.

Operation Identification was established to reduce theft and increase the recoverability of stolen property. To accomplish these objectives, participants write or engrave an identifier on their personal property, which is supposed to be registered with local police. They also place a notice on their doors and windows, alerting potential thieves that the property has been marked. It is hoped that this notice serves as a deterrent.

The results of our survey, which was done primarily in New York State and at Federal agencies in Washington, D.C., indicated that Operation Identification is being extensively implemented. We noted, however, that the numerous types of identifiers being used to mark personal property are hampering efforts to return stolen property to its owners. Law enforcement officials repeatedly told us that a single, unique identifier, or a system of identifiers, would increase the return of property and aid in other police operations.

Although considered beneficial, development of such a system has not been pursued by any Federal agency. We believe the Department of Justice should investigate the matter,

The results of our survey are discussed in greater detail below.

From 1968 to 1977, reported burglaries and larcenies increased 68 percent nationwide, and the use of crime prevention techniques to attempt to control such crimes is widespread. Law enforcement agencies, public interest groups, and even private companies have become engaged in crime prevention activities. Within your Department, the Law Enforcement Assistance Administration has also funded numerous crime prevention projects. One extensively used crime prevention measure is Operation Identification—a system of marking personal property to reduce theft and to increase the owner’s chance of recovering lost or stolen property.

Private companies also encourage property marking. For several years, insurance companies and a national insurance association have offered clients free engravers, literature, and participation stickers. Some insurance companies even offer a discount to clients who mark their property. One company, for a fee, assigns the enrollee a unique identifier and provides an engraver, window stickers, and inventory sheets. The identity and current address of the enrollee, along with the assigned number, are then stored in a data bank for retrieval.

Though much of the effort to mark personal property has been aimed at private citizens, some businesses and State and local governmental units are also participating in such programs by marking their office equipment and furniture.

Participants in the Operation Identification program are using many kinds of identifiers to mark their property.

This variety of identifiers and the lack of a central information source showing which identifiers are being used by whom, has made it difficult to return lost or stolen property to owners. During our survey we contacted 28 police departments. Of the 21 that had property marking programs.

In New York, we noted that the State agency responsible for statewide crime prevention activities promoted one type of identifier, but New York City used a different one. We also found that in another city in the State, two separate projects were using different identifiers and one project was even using two.

Sponsors of Operation Identification advertise that marked property can be returned if recovered, but many of the identifiers in use are not very helpful in effecting the recovery of lost or stolen property. For example:

A 1975 Law Enforcement Assistance Administration funded evaluation of Operation Identification projects reported participants experienced fewer burglaries than their neighbors. However, the evaluation also stated that marked property was not more difficult to dispose of by burglars and was not more likely to be recovered by police or returned to owners. According to the evaluation, one reason the recovery rate did not improve was the absence of a unique and permanent identifier for each property owner in the United States.

Many still believe that a uniform identification system is needed

During our survey, we contacted Federal, State, and local law enforcement agencies, insurance companies, and public interest groups. The information we obtained was similar to the findings discussed in the 1975 evaluation in that it indicated that Operation Identification is a theft deterrent. However, we were also informed that marked property which has been stolen and recovered is not always identifiable or traceable. We were unable to determine how much marked property could not be returned, because no statistics were maintained.

Police officials in those cities unanimously agreed that:

In addition, law enforcement officials told us that a uniform identifier, or a uniform system of identifiers, could aid in other police operations. Law enforcement officials could not provide us with data related to the flow of stolen goods. Some officials believed that stolen property is transported across State lines, while others disagreed. They stated, however, that a national system of identifiers could allow the geographic flow of stolen property to be assessed, and could increase the chances of convicting persons who steal marked property.

We were also informed that an increased number of convictions could result from a uniform identifier since the owner could be located and then appear in court to prove ownership. If ownership could be determined, individuals apprehended with marked property could be charged with possession of stolen property. Publicizing the increased number of convictions could also stimulate more participation in Operation Identification projects [and reduce residential property crime rates and the 250,000 incidents that turn violent each year https://www.bjs.gov/content/pub/pdf/vdhb.pdf].

Our discussions at Federal agencies showed that, although a uniform identification system is considered by police departments to be beneficial, no Federal agency has taken the lead in developing one. We noted that, in July 1971, a letter to a Member of Congress from the then Administrator of the Law Enforcement Assistance Administration stated:

“With reference to your inquiry regarding a national system of identification, you will note that the Law Enforcement Assistance Administration recommends the use of Social Security numbers which already constitute such a national system.”

When we contacted the Law Enforcement Assistance Administration, however, an official said that the agency endorses no single identifier, and that the use of social security numbers probably was not feasible because the Privacy Act precluded tractability through the Social Security Administration. We were also informed that there are no current efforts to develop such an identifier.

Since 1975, the absence of a single unique identifier, or a system of identifiers, has been cited as hindering the success of Operation Identification projects. Law enforcement officials favor such a system, saying it would also aid in other police operations.

Since significant benefits are possible, we recommend that your Department explore the feasibility of adopting a uniform property marking system, either through developing a unique numbering system or cataloging those already in existence. If a uniform system is feasible, its use could be encouraged through crime prevention projects funded by the Law Enforcement Assistance Administration.

As you know, section 236 of the Legislative Reorganization Act of 1970 requires the head of a Federal agency to submit a written statement on actions taken on our recommendations to the House Committee on Government Operations and Senate Committee on Governmental Affairs not later than 60 days after the date of the report, and to the House and Senate Committees on Appropriations with the agency’s first request for appropriations made more than 60 days after the date of the report. We wish to thank you for the cooperation and courtesy extended to us during our survey, and would appreciate any comments you may have concerning this report. A list of the national organizations and agencies we contacted during our survey is enclosed.