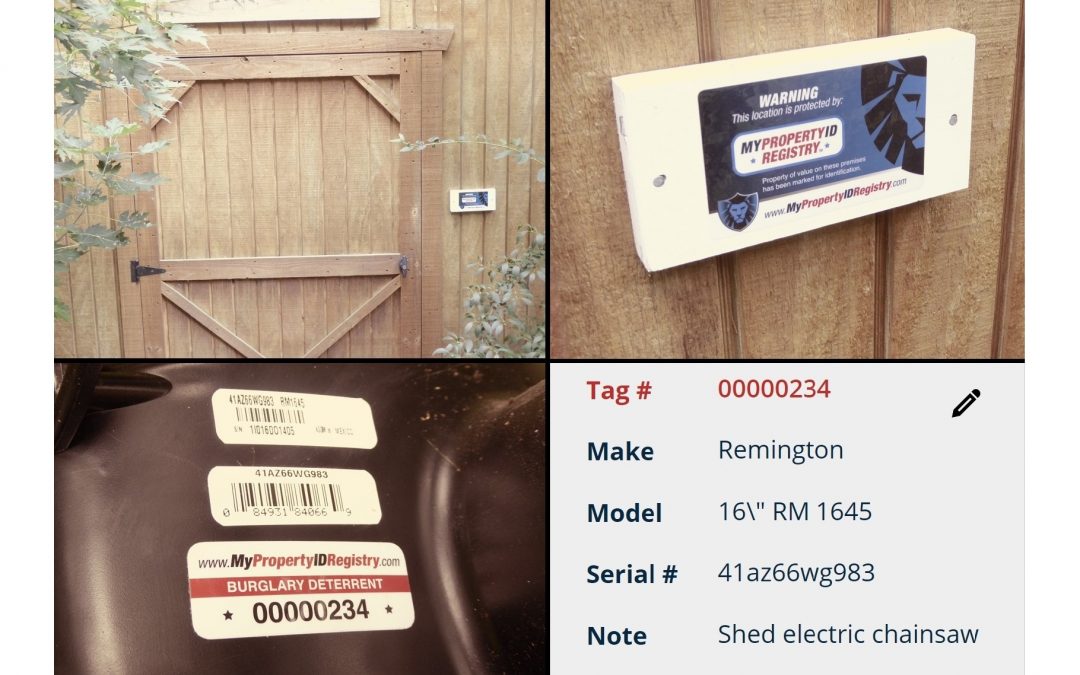 The goal of MyPropertyID is to solve a nagging societal problem that citizens think can’t be fixed. It is something every citizen should do in order to reduce the billions of dollars lost to burglary, theft and loss. It requires a commitment to further improve the police-community partnership by having citizens recognize the value they bring to law enforcement professionals by the simple act of

Property Identification is the key to solving crimes

Property identification is a decades-old, proven method of crime prevention. This strategy is called Operation Identification. It was first conceived of in 1963 by the Monterey Park, California, Police Department. It was such a simple concept that law enforcement agencies embraced it nationally.

By the 1970s, what was then the U.S. Department of Justice’s Law Enforcement Assistance Administration had funded nearly 400 crime prevention projects with an Operation Identification component, at a cost of $100 million in 2018 money. What came out of those studies was a letter in 1979 from the Director of the U.S. General Accounting Office to the U.S. Attorney General stating:

Why it didn’t catch on with citizens

A few reasons why property identification was never widely adopted at the grassroots level by citizens was the problem of how to mark the property and what to mark it with. Initially, people were encouraged to use an etching tool. A few years later, permanent markers and invisible ink were suggested as a more convenient alternative. There was another snag as well. There was no unique, uniform identifier for people to mark their property with. Some suggested using driver’s license numbers or Social Security numbers, which are both risky.

Another reason why property identification was not adopted by citizens has to do with human nature. It’s hard to get people to take action against the possibility that something might happen. But it has worked before. We wear seat belts because they’ve been proven to protect us if we get in a wreck. And we install smoke detectors because they’ve been proven to alert us when there’s smoke and fire. It has also been proven that marking our valuables can be a deterrent to theft, can aid the police in returning stolen items and can help prosecutors get convictions.

The strategy is widely used, but not by citizens

Nothing has changed since that letter was written. Operation Identification is a proven method of crime prevention and continues to be supported by law enforcement and criminal justice professionals nationally. While consumers might think high technology solutions are the answer, law enforcement professionals have gone blue-in-the-face trying to get citizens to adopt the simple Operation Identification strategy.

While the gulf between citizens and the police is yawning, property identification strategies have been fully embraced by large institutions. The corporate version of Operation Identification is called “enterprise asset management,” and has blossomed into a billion dollar industry used globally. This includes militaries; local, state and national governments; colleges, universities and hospital systems; large global manufactures and Fortune 500 companies. Surely everybody has seen a company ID tag adhered to the back of a computer in an office.

My Property ID Registry (MPIDR.com) is a business that takes the Operation Identification concept, merges it with “enterprise asset management” and migrates it to a web-based platform that gives it enhanced features. We even have a pending provisional patent application to protect us.

Our product consists of:

It’s easy, online and affordable. It ships anywhere on the planet via the United State Postal Service at no extra charge.

Recollections of comments we have received over the years.

A viable low-tech crime prevention tool in any form

Property identification is an essential crime prevention tool — whether through writing serial numbers down with pen and paper, typing them in a spreadsheet, taking pictures or video, engraving valuables or using My Property ID Registry (MPIDR.com). We are asking citizens to embrace some form of property identification as a way to fight crime.

We are asking citizens to partner with police and sheriffs departments, county attorneys and neighborhood associations to encourage the broad adoption of property identification. The ultimate goal is to improve the quality of life and safety of our communities.