The Case of the Stolen Badge 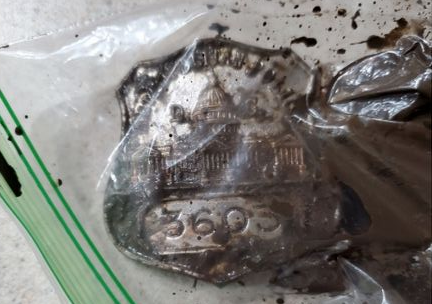 If you ever hope to get a person behind bars who broke into your vehicle, home or business and stole your property, you better have more than security cameras, an alarm system and video doorbells. And in the unfortunate case you are violently assaulted because you walked into the crime scene, being an eye witness is still no guarantee,

There is nothing better than a high-profile crime to shine a light on how law enforcement professionals do their job. So high of a profile that we get to learn, step by step, how one of the best ways to build a case is to definitively trace stolen property back to the rightful owner.

In “The Case of the Stolen Badge,” there are many eye witnesses, photographs and videos of the crime, but even after a great deal of analysis and multiple interviews with a suspect, law enforcement still didn’t feel they had enough evidence.

How do we know this? This particular story was widely covered because it involved the violent assault of a police officer, but in the case of one article, a sworn affidavit was included. It lays out in detail the chronology of the case, and what the tipping point was.
https://www.huffpost.com/entry/thomas-sibick-mike-fanone-capitol-riot-police_n_604bdecec5b672fce4ec9e5d

In reading the affidavit, even though there is mounting evidence that the suspect was the perpetrator, law enforcement professionals still didn’t feel there was enough evidence to make an arrest.

Once the suspect revealed that he was in possession of a police badge with the name of the agency and the badge number of the assaulted police officer, an arrest warrant was immediately issued.

Low-Profile Crimes Are No Different

The most commonly committed crimes are burglary and theft of the contents of businesses, homes, outbuildings and vehicles. They occur in the millions and it’s estimated the 250,000 per year turn violent.
https://www.bjs.gov/content/pub/pdf/vdhb.pdf

Even though many people have security cameras, alarm systems and video doorbells, arrest rates are extremely low and conviction rates even lower. It’s the reason these types of crimes are so common. People are rarely caught and punished.
https://ucr.fbi.gov/crime-in-the-u.s/2010/crime-in-the-u.s.-2010/clearances-figure

What’s missing? Property is rarely marked with a unique identifier and records are rarely kept of the make, model and serial numbers. Think of it like putting a uniquely numbered badge on every piece of property a criminal might target. This is what the police need. Otherwise there isn’t a case. By giving the police the equivalent of a badge number, you make it easy for the police to do their job.