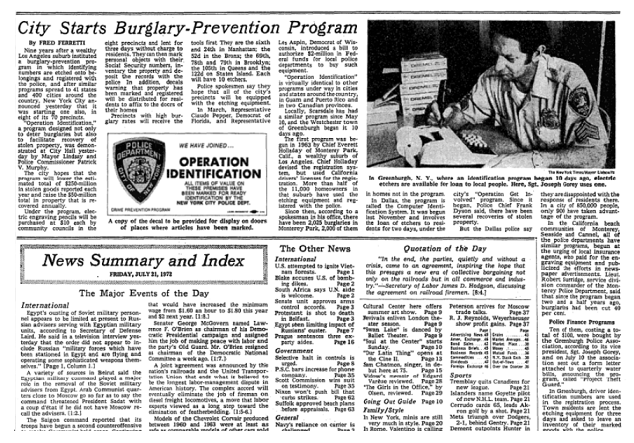 What the New York Times Reported

On July 21, 1972, the New York Times published a story entitled, “City Starts Burglary-Prevention Program.” The article states that “‘Operation Identification’ [is] a program designed not only to deter burglaries but also to facilitate recovery of stolen property…,” and that the “city hopes that the program will lower the estimated total of $250‐million in stolen goods reported each year and raise the $50‐million total in property that is recovered annually.
https://www.nytimes.com/1972/07/21/archives/city-starts-burglaryprevention-program.html

Operation ID dates back to the 1960s. In it’s early years, according to the Times, Operation ID spread to “…cities and states around the country, in Guam and Puerto Rico and in two Canadian provinces.” The Times continued, “after similar programs spread to 41 states and 400 cities around the country, New York City announced yesterday that it was starting one also, in eight of its 70 precincts.” 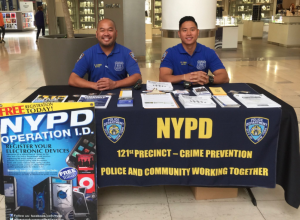 The NYPD is the largest police force in the United States, and is highly respected around the world. The NYPD still actively promotes Operation ID. Operation ID has been shown to work decade after decade, but there is one critical element missing: buy-in from the public. Without citizen involvement, property crimes will always be a nagging problem.

The Times article states that the “Dallas police say they are disappointed with the response of residents there. In a city of 850,000 people, only 900 have taken advantage of the program,” but since “it began…there have been several recoveries of stolen property.”

The issue is akin to seatbelt usage. Seatbelts are shown to work, but only if citizens wear them. Operation ID suffers from the same problem. Unless Operation ID is implemented, property crimes will always be an unaddressed, nagging problem.