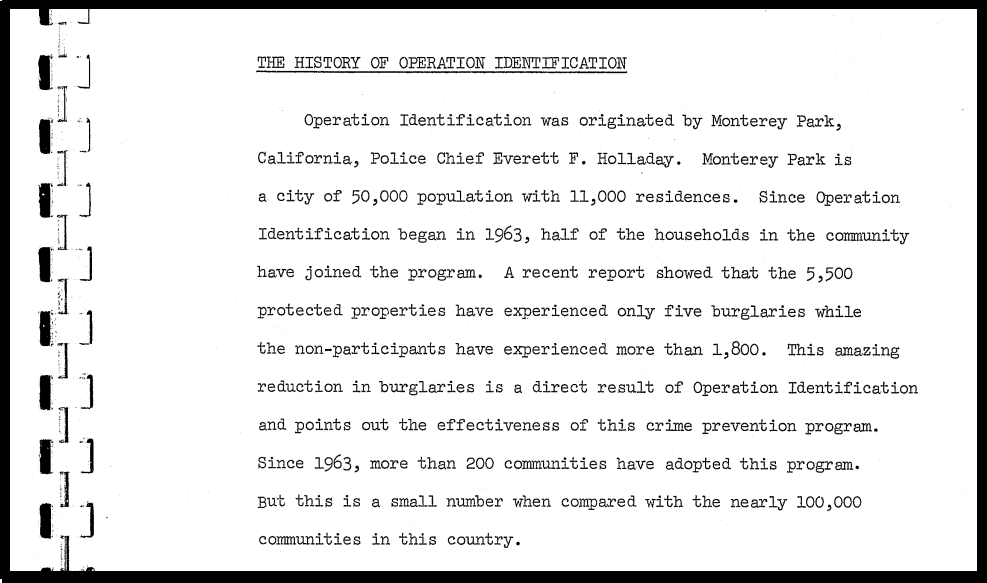 Operation Identification was originated by Monterey Park, California, Police Chief Everett F. Holladay. Monterey Park is a city of 50,000 population with 11,000 residences. Since Operation Identification began in 1963, half of the households in the community have joined the program. A recent report showed that the 5,500 protected properties have experienced only five burglaries while the non-participants have experienced more than 1,800. This amazing reduction in burglaries is a direct result of Operation Identification and points out the effectiveness of this crime prevention program. Since 1963, more than 200 communities have adopted this program. But this is a small number when compared with the nearly 100,000 communities in this country.
https://www.ojp.gov/pdffiles1/Digitization/25254NCJRS.pdf

The first [Operation ID] program was begun in 1963 by Chief Everett Holladay of Monterey Park, Calif., a wealthy suburb of Los Angeles. Chief Holladay devised the registration system, but used California drivers’ licenses for the registration. More than half of the 11,000 homeowners in that suburb have used the etching equipment and registered with the police. Since then, according to spokesman in his office, there have been 2,025 burglaries in Monterey Park, 2,000 of them in homes not in the program.
https://www.nytimes.com/1972/07/21/archives/city-starts-burglaryprevention-program.html