An Added Layer of Security 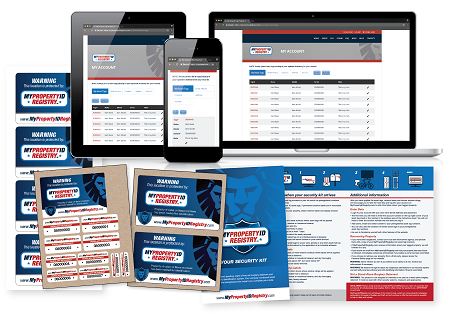 Alarm systems, security cameras and other high-tech solutions are not always as effective or as convenient as promised. Criminals know they might be arrested, but they also know they’re unlikely to be convicted unless certain measures are in place. That’s the added layer of security you need with the MyPropertyID system.

An added layer of security proven to work

The MyPropertyID system is a onetime cost that never needs to be turned on or off. Our strategy will not just deter property, but will also assist the police in solving the crime in the unlikely event one should occur.

The other Neighborhood Watch strategy

Most citizens are familiar with Neighborhood Watch, but very few people, including many law enforcement professionals, remember the other crime-fighting tool paired with it called Operation Identification.

In the old days, Operation Identification was inconvenient to implement, so it never took off. Too bad because it was such a powerful tool for law enforcement professionals that it was endorsed by the Federal Bureau of Investigation (FBI), the International Association of Chiefs of Police and the National Sheriffs Association.

Operation Identification for the internet age

Fast forward to the age of the internet and Operation Identification has been reinvented as a D.I.Y., mail-order kit that contains the same commercial-grade ID tags used by universities, hospitals and corporations to mark the property prone to theft.

The MyPropertyID kit also includes warning signs for doors and windows of dorm rooms, apartments, homes, small businesses, outbuildings and utility vehicles. The tough-to-remove ID tags and signs are designed to let criminals know they need to find another target.

The power of serial numbers

The real power of the system, and what the FBI, police and sheriff departments need to arrest and convict criminals, are the serial numbers of the items burglars typically target: cell phones, tablets, laptops, game systems, yard equipment and power tools.

A tool that helps the police solve crimes

This makes selling stolen items at legitimate pawn shops or other resellers impossible. You’ll also be surprised to learn that the police serve search warrants all the time and find stolen items that are impossible to trace back to the rightful owners because they are not registered.

When you file a police report, it’s the make, model and serial numbers of stolen items that that authorities want and need. Often, criminals are not convicted due to lack of evidence that ties them to the theft of particular items, but if the police have serial numbers tied to the rightful owner, not only will there be an arrest, but the criminal will be convicted.

With so many electronics in our possession, items of value get lost or misplaced with regularity. When they are found, it is often impossible to figure out who the items belong to. Again, electronic security measures have their place, but batteries run dry and power sources can be switched off.

As long as the ID tag is not removed, a Good Samaritan can reunite you with lost or even stolen property. It may be tough in today’s world to keep from being cynical, but there are many, many more good people in this world than bad. The system works.