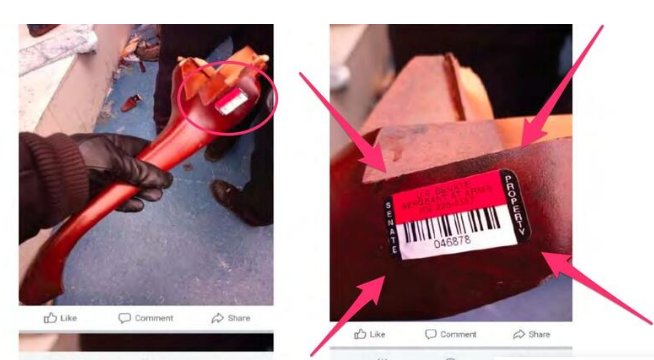 A piece of property tied to a crime scene is often enough evidence for a judge to order a search warrant. The same cannot always be said for eye witnesses, security cameras, alarm systems and video doorbells. That’s why marked property can be a huge aid to law enforcement.

When the January 6, 2021 rush on the United State Capital Building occurred, thousands of suspects were caught on videotape. As arrests were slowly made, prosecutors had to rely mostly on plea deals to make charges stick. That’s because the evidence was inadequate for winning a jury or bench trial.

In only a few cases was there traceable property that linked a perpetrator to a crime scene. It’s critical to understand what marked property is—where the make, model and serial number is recorded, and the property is tagged in some way. Market property is often the simple but effective shred of evidence that breaks cases wide open.

In a previous case study, a perpetrator stole the badge of a Capital Police Department officer. While the video footage placed the suspect at the Capital, there was not enough probable cause to make an arrest. When it was learned, he was in possession of the badge, a judge ordered his arrest and his property searched.
https://mypropertyidregistry.com/2021/05/09/case-of-the-stolen-badge

In the case of this blog, the perpetrator posted a picture of himself on Facebook with a souvenir he acquired at the Capital—a chair leg with a visible asset tag.
https://www.yahoo.com/news/flor-man-arrested-fbi-says-030001784.html

That’s all it took to make an arrest and have a search warrant issued. It didn’t end well for the defendant.
https://www.news4jax.com/news/local/2021/10/13/i-was-wrong-orange-park-man-accused-in-capitol-riot-gets-18-months-on-gun-charges/